In partnership with Policy Network and the Aston Centre for Europe, FES London hosted the panel discussion “vEUws on Brexit: the Franco-German Agenda”. 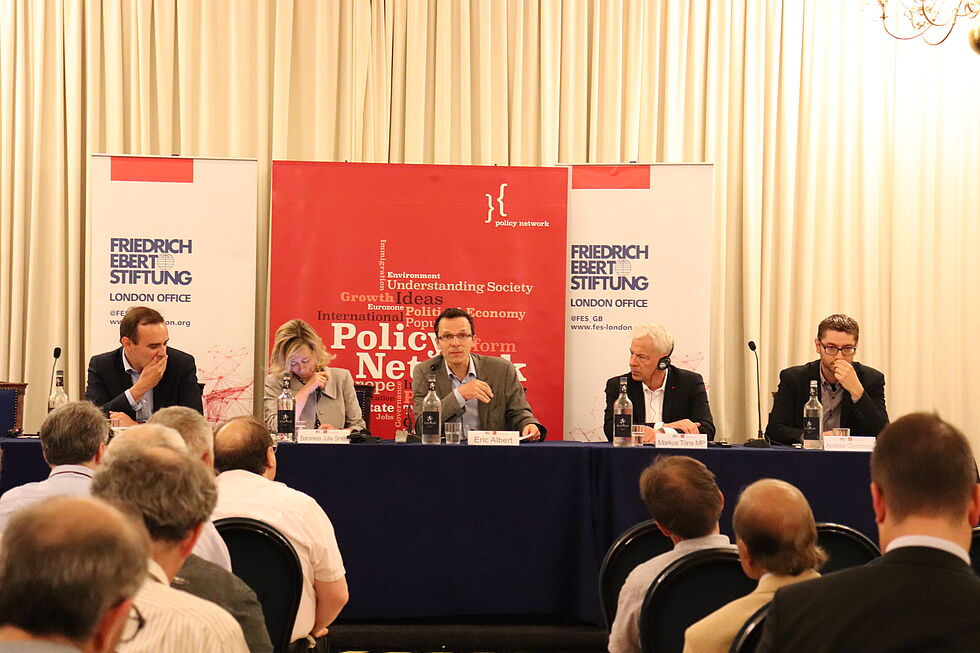 While the UK's withdrawal from the European Union has dominated the British political landscape in recent months, domestic media coverage has focused mostly on the British government's priorities for a Brexit deal. The interests of the other EU member states, by contrast, have been largely overlooked. This event therefore sought to shed light on the negotiating priorities of Germany and France, two of the biggest political powers in Europe.

In a well-attended panel discussion, Markus Töns, an SPD politician and Brexit rapporteur for the German parliament's economics and energy committee, and Alexandre Holroyd, a member of parliament for La République En Marche, outlined the German and French positions on Brexit. Baroness Julie Smith, a political scientist and Liberal Democrat member of the House of Lords, and Dr Andrew Glencross, lecturer in politics at Aston University, also commented on the negotiations. The discussion was chaired by Eric Albert, the London correspondent for Le Monde.

Minor points of difference between the speakers were outnumbered by the numerous areas of common ground. Markus Töns and Alexandre Holroyd expressed their regret at Britain's decision to leave the EU, and declared that their respective countries would continue to work closely with the UK. However, they insisted that Britain would not be allowed to “cherry-pick” between the four freedoms of the EU – free movement of labour, goods, services and capital. It was also emphasised that the onus was on the British government to present a clear set of demands before the EU could respond, with frustration expressed at the slow pace of discussions so far. Holroyd evidently struck a chord with several members of the audience with his concluding remark that many Europeans held a strong emotional attachment with the EU, which would inform their negotiating stance with Britain.

This site uses third-party website tracking technologies to provide and continually improve our services, and to display advertisements according to users' interests. I agree and may revoke or change my consent at any time with effect for the future.