The FES/CER conference on „Europe’s Climate Change Challenge” explored Europe’s potential as a global climate leader. In three panels the participants examined Europe’s role in establishing and maintaining a global climate change regime. The conference aimed to analyse how Europeans can develop the infrastructure and regulatory measures, needed to form a clean Energy Union and incentivise industries to reduce their environmental impact. 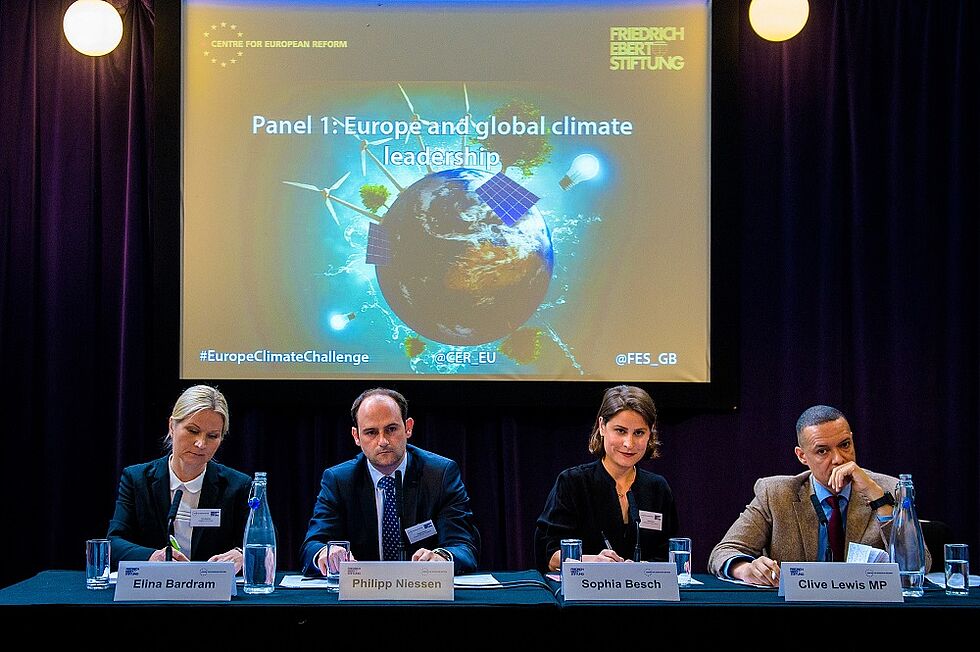 The first panel in our conference with CER discussed Europe’s role as a global climate leader, asking how Europe can support sustainable development worldwide and lead the transition to a low-carbon economy. Panellists argued that solidarity with the most vulnerable countries, that don’t have the means to tackle climate change but suffer the most from it, is vital. They concluded that a new green deal should focus on reducing inequality and on enabling access to public housing, transport and other services.

Questions around forming a clean energy market were discussed in the second panel. How can Europe develop the infrastructure and regulatory measures needed for a clean Energy Union? According to the panel, member states’ national agendas and geopolitical tensions risk undermining the Energy Union and delaying the transition to a decarbonised European energy system. Panellists identified five key issues to a European Energy Union: security of supply, a fully integrated market, energy efficiency, decarbonising the economy, and new technologies.

In the third panel, participants shared their views on industries and innovation. New low-carbon technologies are vital in order to meet Europe’s climate change objectives and reduce greenhouse gas emissions. Panellists proposed to create synergies between climate and industrial policies. Innovations are most often costly; however, participants argued that it is also essential to focus on the social and regional dimensions for employment in industries to leave no one behind.

Bearing the links between the panels in mind, participants concluded that the financial side should be secondary when coping with climate change and that strong political commitment is needed to deliver sustainable energy.