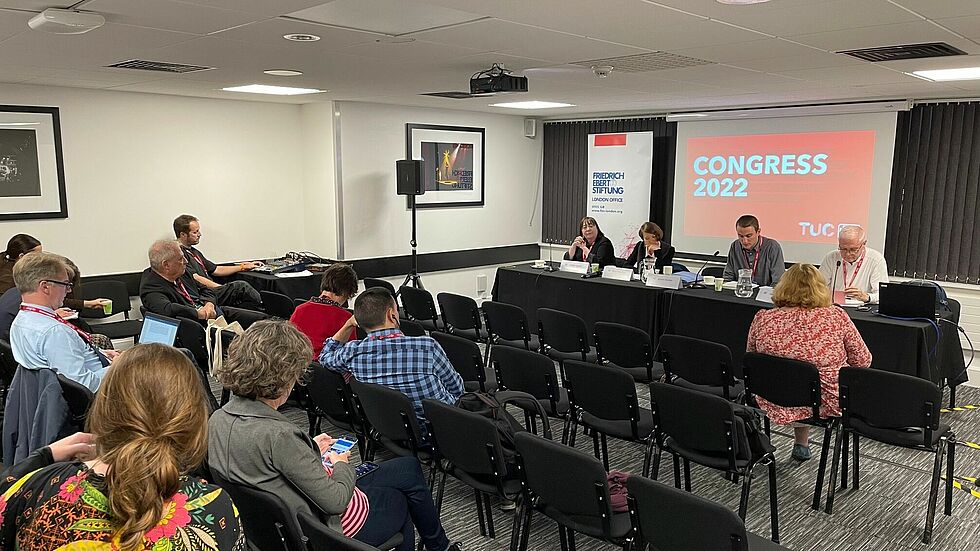 On the evening of Wednesday 19th October, FES UK hosted a panel discussion alongside the TUC Congress 2022 at the Brighton Centre in Brighton.

The topic of discussion was ‘Beyond Brexit: promoting workers’ rights, decent jobs, and standards’. Herbert, Rosa and Esther discussed the implications for workers’ rights of UK government plans to allow EU legislation to lapse after the end of 2023. In addition, the panelists discussed new anti-union legislation, such as allowing agency workers to replace striking workers, legislating for minimum service levels, and banning strikes by different unions in the same sector.

The TUC plays a central role in ensuring that the Revocation and Reform bill, also known as the Retained EU Law bill, adheres to the Level Playing Field commitments made by the UK government in the UK-EU Trade & Cooperation Agreement (TCA). Through the work of the Domestic Advisory Group, an official UK civil society monitoring body, the importance of respect for the so-called Level Playing Field clauses in the TCA is upheld.

Failure to do so could result in the EU imposing penalties such as tariffs on UK goods or fines, according to a report published in January 2022 by Professor Federico Ortino, professor of international economic law at King’s College London. In his report, commissioned by the TUC, Professor Ortino highlights the ways in which the TCA can be strengthened to allow workers to better enforce their rights in various ways, such as giving trade unions the power to bring cases when workers’ rights are threatened, removing the requirement for proof that violations of Level Playing Field commitments affect trade or investment, and obliging the UK to match EU standards on work-life balance and transparent and predictable working conditions.

This site uses third-party website tracking technologies to provide and continually improve our services, and to display advertisements according to users' interests. I agree and may revoke or change my consent at any time with effect for the future.